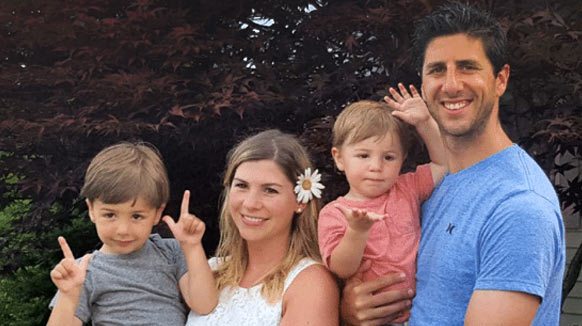 In a deal that was first conceptualized in 2010, Dan and Leslie Doenges had arranged to purchase Vermont Sport & Fitness Club from current owners, Frank and Jeanne Dorsky. The deal was realized on January 1st, 2017. Mr. Doenges has been a key part of the VS&F staff since 2009 and has played numerous roles. He is currently the club’s General Manager and also serves as Tennis Program manager and as a tennis teaching professional.

A Rutlander since age 4, Dan is a graduate of Assumption College where he majored in Marketing and Management while playing varsity tennis on Assumption’s Division II nationally ranked tennis teams. He also played varsity soccer. Leslie, a Rutland native, attended The University of Vermont where she earned a Bachelor of Science Degree in Nutrition.

In 2009, after some time away, Dan and Leslie returned to Rutland to marry and raise a family. They wanted to lead a Vermont life, close to family and friends. They were helped to this decision by seeing other young professionals coming back to Rutland. They believed they could be a success here and make a difference in the community.

In talking about their decision to buy, Dan explained that “…the club is something special to the Rutland area and more specifically to me and my family. Frank and Jeanne started with an empty building and a goal, and in the last 23 years have created one of the best clubs in Northern New Eng- land. VS&F is filled with an amazing community of people and is something that we are proud to be a part of and excited to take to the next level.

“Our guiding principles will remain,” Doenges added. “Honesty, consistency, and professionalism. These principles have served Vermont Sport & Fitness well and will guide our transformation into the future.”

No Comments to "Vermont Sport and Fitness To Welcome New Owners"

COPYRIGHT ©Vermont Sport and Fitness 2020. ALL RIGHTS RESERVED.
Hosted and Managed by 141 Creative.